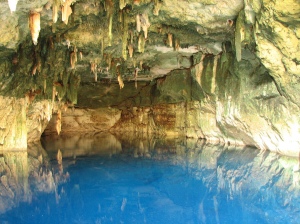 “Does the horse have a name?”  I asked in Spanish.  Our mid 30s guide, who had jet black hair underneath his grey baseball hat, chuckled to himself, revealing just a few golden teeth.

A skinny six-year old named Jesus held on to Tractor’s reigns while his father, our tooth-deprived guide, hurried to lift our cart off the narrow-gauge railroad we had been following.  My immediate family, my brother, my mom and dad and I, were dressed only in swimsuits, and we waited patiently off to the side of the track as two oncoming horse drawn carriages careened by us. 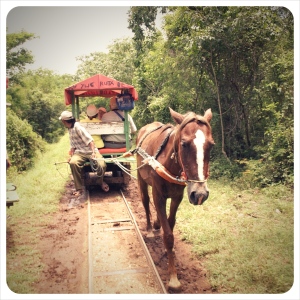 After the traffic jam cleared, we continued riding along the three kilometers of railroad to an underground swimming hole, known as a cenote.  The Yucatan peninsula in southeast Mexico is littered with these natural cooling spots due to its peculiar geology.  The large landmass, as big as South Dakota, contains almost no rivers.  Instead, local inhabitants for centuries have relied on the freshwater that trickles up into these caves.  The Mayans built their massive cities like Chichen Itza next to some of the largest cenotes to ensure easy access to drinking water.

Today, the cenotes are used mostly to entertain tourists.  They range in size from just a few feet across to as big as an acre.  During our Christmas vacation to the Yucatan beach town of Progreso, my family and I decided to spend one day visiting three relatively obscure cenotes near the tiny village of Cuzama.

To get to the cenotes, though, is not as simple as driving up to the parking lot and walking into the pool.  Instead, the local authorities have installed a vigorous jobs program that requires interested parties to pay a guide to drive them to the three cenotes, located along two different sections of railroad tracks.  And this comes after driving for 30 minutes on narrow back roads.

After we figured out the logistics, and somehow got placed in front of a group of 20 French tourists, Jesus’s father whipped Tractor into action, and we flew down the track.  Earlier that day, we had visited Chichen Itza, which has a giant, open air cenote, sort of like a Midwestern farm pond.  We were expecting something similar.

Instead, once Tractor slowed to a rest, we hopped off the cart and walked to small hole in the ground, about four feet square.   Our guide, clad in sandals and jeans, rapidly descended the shoddy staircase.  We nervously followed close behind.

The cave opened into a giant cavern, as big as a large barn, with the ground sloping down at a 30 degree angle to a pool of water butting up against one side of the cave.  The stone carved staircase descended straight into the shallow water.  Beyond the staircase, the water opened into a large pool, about 50 feet long and 15 feet wide.   The Stevens gentlemen jumped in and posed for pictures by hanging from stalactites.

The next cenote tested our claustrophobia.  Instead of a shoddy staircase, we descended 24 meters on two shoddy iron ladders that extended straight down into the ground.  While climbing down the ladder, I could stretch out my arms and nearly touch the sides of the tube.

At the bottom of the silo, though, lay an undisturbed pool of deep blue water, brightly lit by a surprisingly out of place CFL light bulb.  A group of teenage girls stood on a ledge four feet above the pool as my brother, dad, and I navigated the ladders.  With a captive audience, we plunged into the 60 degree water, and swam the short length of the pool which only extended 30 feet and stretched about 5 feet wide.  Once the onlookers had departed, we took turns practicing our cannon balls off the gallery.

The final cenote proved accessible enough to welcome the entire Stevens family.  This one was much larger, the shape of a giant oval as big as an NBA court, about 20 feet below the surface.  In some more optimistic time, an aggressive entrepreneur had installed a cement staircase down to a large, stone-carved platform.  It looked like a set for the Lord of the Rings.

We whittled away the last of the daylight at this cenote, drawing the ire of the Mexican tourists by continuing our cannon ball practice and swimming into the depths of the cave.  We were the only swimmers speaking English.

As darkness threatened, we woke up Jesus and his dad, and rode peacefully as Tractor towed us back to our car.

During the entire three hour trip, the only time our guide showed any emotion was when he relayed the name of his beast of burden.  As we collected our belongings from his cart, the eldest Stevens paid him for the trip, adding a tip of about $10.  He thanked us politely, and walked away.  But when he thought we were out of earshot, he said something meant only for Jesus.