In Vicuña, Chile, I woke up in a hostel run by a grandmotherly German woman named Rita and her poodle, Blancita.  Part of the enormous German breakfast she offered included fresh avocados which have never agreed with my stomach. 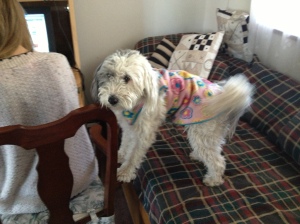 After putzing around the town for a couple hours, I finally got the bus to Pisco Elqui, from where I started running through a desert river oasis.  The small desert town of Pisco marks the beginning of a long desert canyon where barren mountains descend to meet a tricking stream, the remains of Andes snowmelt.  Ten kilometers farther up the valley, an artist’s market beckoned me.  Starting out from Pisco, I had an iPhone on my arm and a large bottle of water uncomfortably passing between my hands.  The white long sleeve t-shirt beneath my red shirt, eventually became a sun blocking burka. 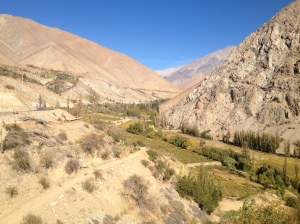 After an hour of running, the market came into view.  Coming up the last hill, a voice from beneath a giant poplar tree yelled, “where are you from?”  A man, who was about three feet tall in a yellow cava shirt, repeated the question louder so I could hear him.

I turned off This American Life, and “took a shadow” as the man, who had maybe two or three teeth left, instructed.  He had lived in New Jersey for eight years but now lived in the Elqui Valley, I presume to cash in on the area’s legendary “energy.”

Enjoying the conversation, we were interrupted by a tall, long-haired drunk man.  In highly accented Chilean Spanish, he joked about my running stride and admonished me to adjust my gait.  He demonstrated how to make the change, reenacting a movement reminiscent of Roal Dahl’s BFG. 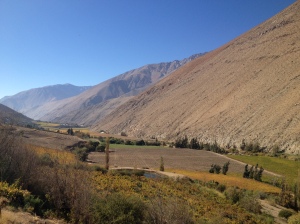 Nonplussed, I excused myself and jogged down to the market.  In search of the banos, I found their demure outpost.  Saved from paying the 200 pesos by an inattentive attendant, I perused the toilet.  Running water but no paper.

The leaves from the shady trees behind the bathroom appeared innocuous.  I tore a couple off and rubbed then on my arm, testing their proclivity for inflicting discomfort.  None resulted, so I returned to the bathroom to do my business.

Subsequently, the 6 mile run back to Pisco was perfectly pleasant. 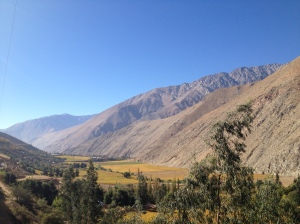