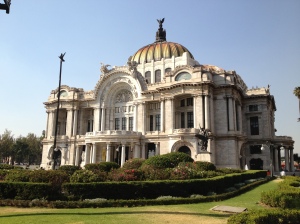 Mrs. Williamsen, my piercing high school Spanish teacher, appeared to be hiding in every establishment I patronized in Mexico City.  After a combined four years of high school and college Spanish, I figured I would know the language well enough to order food and navigate the city.  But after just a few hours, I realized how little I actually knew.  When I stopped to buy a fruit, there was a grammarian in the house.  When I tried to decipher my restaurant menu, I could sense a distant vocabulary test gone unremembered.  When I tried to find a bus to get back to the airport, the words for airport and get off the bus, escaped me.  Most frustratingly, the accent was so sharp that I couldn’t understand anything.

I made it into the center of Mexico City easily enough, taking a bus and the subway.  After visiting some of the city’s prominent landmarks, I settled in at an idle restaurant advertising a 50 peso meal of the day. For a little under $4, I could get a feast.  Immediately, though, I ran into trouble.  I thought the meal was a set menu, but on no, there were choices.  First, I had to pick between rice and soup (cam…).  I couldn’t figure out the difference, so the waitress brought me soup.  She was kind enough to work through the language divide, reiterating her Spanish until I figured out what she meant.  The soup was good, but as a hungry cheapskate traveler, hot lime and pineapple soup is less preferable to a giant pile of rice.  Zero for one.

Next, I had to choose between a taco and something else.  I chose the taco and it was probably the best taco I have ever had.  One for two.  The taco had just the right mix of cheese, jalapenos, breaded seafood, and tortilla to cue the right milieu of taste buds.  In my backpack,I had a full list of taco houses recommended by the New York Times, but given my layover schedule, this hole-in-the-wall replacement would have to suffice.

Next up, I had to decide between pollo and something else.  Since I know pollo is chicken, I kept pressing for that despite the waitress’s protestations.  As I saw her bring a giant plate of steak to my neighbor, I kicked myself under the table.  One for Three.  Luckily, dessert required no decision, just acceptance of a delicious cold, lime green pudding.  I studied the menu as I prepared to leave, noting that it was not possible to tell that choices were involved. 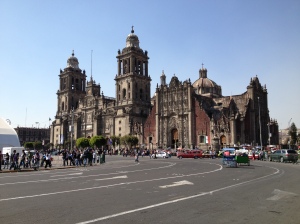 Next, I went to the city’s giant merced market which covers several city blocks and hides its accompanying metro station like a prisoner hides his escape tunnel.  After getting acquainted with the market’s layout, passing stands full of spices, vegetables, flowers, kitchen appliances, fish, and more, I found a fruit vendor from whom to buy an orange.  I pointed at the pile of oranges, and said, “uno.”  The proprietor started to fill a bag with oranges, thinking I had ordered one kilo.  I said, “no no no, uno!”  The woman glared at me and said, “una naranja o uno kilo.”  Aha, a perfect lesson on the importance of (indefinite articles).

Finally, after my a few hours and $10 spent in Mexico City, I made it back to the subway stop to get a bus to the terminal.  Climbing the steps out of station, I spotted a woman wearing a red AeroMexico shirt, and decided to follow her to the airport.  The bus that dropped me at the metro was a slick, new bus obviously catering to the airport crowd.  Instead, I hopped on a collectivo or mini bus from what must have been the 1980s or earlier.  As the driver blasted his music, I struggled to say airport, and from the Aeromexico woman, he could tell where I was headed. When we got to the airport, the driver helpfully pointed it out to me, and told me to get off.  I couldn’t understand him until he was adamant about it.  He was trying to explain to me that I had to get off and cross the road to walk to the airport.  This time, the lesson on formal commands came to mind, but none of the specifics came with it.

As I hopped off the bus and trudged back to the gleaming international terminal, I looked over my shoulder to see if Mrs. Williamsen had somehow followed me off the bus.  Fortunately, that was the end of the Spanish lesson for the day.