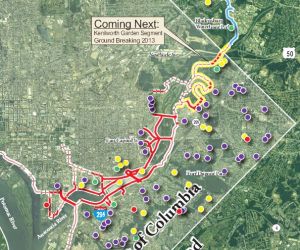 When D.C.’s Department of Transportation finishes the Kenilwoth Gardens segment of the Anacostia Riverwalk Trail, cyclists will have access to one of the best urban escapes in the area.  To reach the current trailhead of the Northeast Branch Trail, however, D.C. residents have to battle their way through Washington’s stop-sign ridden streets.  One benefit of this missing connection is the relative peace and quiet afforded the trail’s users.  As I pedaled along the path on a recent Saturday afternoon, I embraced the unexpected tranquility, finding the urban escape’s middle class surroundings gleefully reminded me of my childhood.

Riding in the District

Washington’s richer suburbs and the National Park Service have led the nation in developing long-distance trails, building gems like the bucolic Mt. Vernon Trail along the Potomac River, and the Capitol Crescent Trail along an old railroad bed.  These trails represent great achievements in cycling infrastructure, but they have been overrun for decades by throngs of thousand-dollar bike-pedaling, spandex-wearing cyclists.

What D.C. doesn’t have is a serene bike path connected to its low income areas.  Cycling advocates have long derided this disparity in development, while many urban planners have noted the shortage of low-income cyclists.  Though I understand the discrepancy, I still find myself craving long-distance rides that take me through the blue-collar neighborhoods of my rural Iowa youth.

Several years ago, a friend and I rode the metro to Greenbelt, Maryland, where we biked around the Patuxent Wildlife Research Center in Bowie, about 25 miles northeast of D.C.  I was simply tagging along on the ride, so I didn’t know anything about the area.  I was quite shocked, then, to find out recently via NPR’s RadioLab, that the refuge is a leading scientific research center.  Scientists there are leading an initiative to repopulate the once nearly extinct whooping crane.

Nearby Beltsville boasts the U.S. Department of Agriculture’s research headquarters.  Together, these two facilities provide cyclists thousands of square miles of rural pastures, fields, and woodlands to explore in the heart of the Washington-Baltimore metro area.

Long since tired of my usual escape routes, I decided to ride out to Patuxent.   I expected to find a relaxing view of ponds, birds, and trees; I didn’t expect find a path through my past.

Since D.C. is still at work on the connector trail, I first had to navigate Northeast’s bumpy streets from my house in the Atlas District, to Mt. Rainier, Maryland.  For the first few miles, I passed through the low income neighborhoods of Trinidad and Langdon, areas unfamiliar to my childhood.  As I reached Mt. Rainier, however, the neighborhoods turned into snapshots of my past.

Every two years during my childhood, my father, a politician, had to campaign to get reelected to the state house of representatives.  During even-numbered falls, I found myself searching for votes alongside him in the blue-collar towns interrupting Iowa’s fields.

Pond behind the visitor’s center

Except for the population centers surrounding the area’s lakes, Iowa’s communities are largely uniform in their layouts.   Most have a commercial main street with houses rippling out for several blocks in each direction.  Residents live in one or two-story, single family homes, though some of the larger towns have built low income apartments on their outskirts or above downtown businesses.  As I cruised through Mt. Rainier, images of walking those streets, knocking on strangers’ doors, flooded my head.   Normally I spend my time in the district’s downtown or its revitalized nightlife corridors, neighborhoods completely alien to my pre-adult life.  Mt. Rainier, however, was bustling with small town life.  The town’s two-block business district boasted several local vendors, while in its neighborhoods, men devoured stacks of firewood.  Their kids played football in the backyard.  It could have been a lot of towns in Iowa.

From Maryland’s mountainless suburb, I hopped on the Northwest Branch Trail following a tributary of the Anacostia River for two miles before connecting to its sister trail, the Northeast Branch.  At this point, the Anacostia is just a trickle of a stream, hardly prefacing the wide river it is about to become.  The river’s trails, however, outshine their demure benefactor.  The bike paths bob up and down the dikes holding back the Anacostia, creating a meandering path; most designers would have settled for a plodding route along the floodplain.  With functionality in mind, the engineers also avoided nearly all road crossings by directing the trail underneath bridges instead of bisecting traffic on top.  For nearly five miles I cruised along like a bobber dipping beneath the green waves of the levy.  Initially, 1950s houses with single car garages and brick façades peered out on to the path, but soon the levies widened to allow athletic fields to take root.  Countless football and softball fields and even a hockey rink took shape out of the flat grasslands created by the river over thousands of years.

Again, I harkened back to my youth.  On the campaign trail, we would pass city parks teeming with Iowans enjoying their Saturday afternoons.  If I saw a football game, I’d look longingly at my dad who would shrug sympathetically as we trudged to the next house.  During those fall campaigns, we’d encounter the best in families, enjoying their weekends to the fullest.  Power tools echoed from garages while feet connecting with taught leather rang out from city parks.  Inside houses, football announcers blared from big screens.  My December bike ride had that same Americana feel.  When I was forced to ask Iowans for their vote, I hesitated to intrude on their hard earned leisure time.  On my bike in Maryland, I experienced that same familial warmth, but without running interference.  The weather and time of year also framed the memory since those political Octobers in Iowa, felt like that warm December day in in the mid-Atlantic.  Colorless leaves still clung to their trees in December, much like they would have in an Iowa October.

Eventually, the rivertrail unceremoniously dumped me in a suburban hellhole, coming to a stop at a six-lane avenue strewn with stoplights and stripmalls.  While the river trail captured the best of the suburbs, the ugly side wasn’t far behind.  Suddenly, I was ripped out my memories and deposited abruptly in the present.

Entrance Road to the Wildlife Center

Coming to the end

I quickly rode past the supermarkets and Starbucks, escaping from the noise to a rural two lane highway.  Iowa oozes with small towns connected by perfectly straight, perfectly flat two lane roads.  As we drove from town to town, Dad and I would stare out at the corn and soybean fields sprinkled with tractors and silos.  While Maryland’s roads lacked Iowa’s precision, the USDA’s research facility, with its barns and elevators rising in the distance, provided an appropriate backdrop.  As I pulled into the Patuxent visitor center, it felt like Dad and I were returning home after a long afternoon of courting voters, but on this day, I was only courting memories.

2 thoughts on “From Iowa to Maryland in One Afternoon”